When the ten year old son, watching a movie with his father asked,"What is a condom? All that he learnt then was to "Hush!" "Hush", for the questions and things that make you uncomfortable.
Same happened with the thirteen year old girl who asked her brother, and that, publicly, to get her sanitary napkins when her periods suddenly started while they were out for lunch.
Not just these. Even with the kind of increase in the number of rapes, it was not discussed at the dinner table. 'Sex' turned the faces of numerous people on the train when read out loud by him.
Even with all the modernity, the progress, the development and the education, an indian mind still has a very narrow, descriptive list of 'acceptable' things.
A phenomenon as natural as menstruation is something that people are afraid to speak of. It has somehow become something impure, something to be hidden and be ashamed of. Why with the kind of modernity that we have accepted, do we need to wrap our sanitary napkins in black polythenes so that no one can see it?
Sex, something that is as essential for humans as their existence itself, is the one thing that nobody talks about in the family. And then there all these sources for the little ones to know about it. But how much of it is accurate? And what exactly do they really need to know? These questions make the concept of sex education very important but then again, because of the discomfort caused to the learned ones, this topic is not given great attention.
While giving good values to the new generation, so that they can continue to uphold our 'culture', we make them so narrow minded that as they grow older their capability to question and reason dies and their curiosity to learn new things fades away.
The next time your kids, your younger siblings or any curious child asks you something or just talks about something 'inappropriate', be mature and grown up enough to respond responsibly instead of 'hushing'. 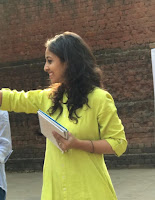 Harshita is a first year economics student and coordinates campaigns and issue based sessions at Sauhard
Posted by Unknown at 12:32 PM