It is believed that when a child is born, he is born with all the intelligence. The world he sees growing up is something different from his own eyes. He is born with his own talent, abilities and most importantly 'questions' for us. It is also said that, "Every child is born with all sorts of inquisitiveness in him." But the thing that makes me wonder is, why can't we say "Every adult grows up with the same inquisitiveness he is born with." ? Because that is not universally true. Right? O'come on, how many of us raise the same number of questions and with the same type of mindset like the way we used to when we were little kids? Hardly a few.

It is a bit difficult to figure out the exact reasons for a child's lost level of inquisitiveness, but still a few are playing an important role in killing all the innocence and intelligence by suppressing a young child's questions. It does happen that a child who is all playful and outgoing in his childhood becomes all timid and quiet in his teenage. Yes, hormones do play an important role. But I'd say not every time. The environment a child is brought up in also plays an important role. Your behaviour towards him, towards others, towards yourself is being carefully observed by your child. In Fact, not only your own child but even other children are getting to know about you some or the other way. A child's questions are answered by all the parents, no doubt, in fact that how we get to know the world, but the real question is 'are all the questions a child raises answered?' The answers for this would be:-
1:- Obviously No. Sabhi sawalo ka jawab thodi hota hai. Hum bhagwan toh nahi hai.
(I would say.. it is because of the questions that weren't answered in your childhood. Because if you give such a vague answer in today's tech-driven world, you definitely need to explore your smart phone!)
2:- Somebody might say a Yes. And they would assure us they answer everything their child asks and in fact they would also do some research and get back to their child with answers when they themselves don't know about it.
(I would say...Excellent. Good going!) 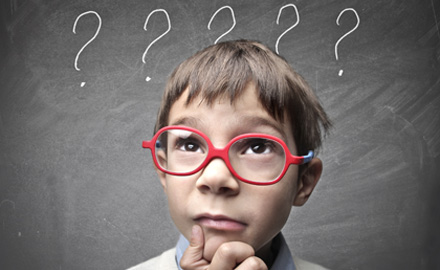 See, I don't say parents don't want to answer their little child's questions, it becomes a headache for them only when they are asked in some weird situations. For an instance, we avoid some cliche queries of our child in public/ in a social gathering. We try to avoid the child's questions sometimes because we don't want to look foolish or uninformed in front of them by telling them we don't know the answer. But we shouldn't forget that just because we don't have an answer to the child's question doesn't mean the question doesn't have an answer. It does but it needs to be discovered. How can we forget, when we are all stressed out, our tiny little toddler's touch, his/her smile would make us all fresh and energetic but if, when the same toddler grows up a little and comes up with questions in the same situations, we might drive him away or divert his attention. Why so? Such little things haven't even noticed by us. But they are all being captured in the child's mind. We all grown ups need somebody to talk with, where we can share all that we feel. Right? It is human nature after all. A child is also in search of that 'somebody' where he can get his answers, 'somebody' who listens, 'somebody' who is attentive towards him/her.
It is also said, "Never let that little child in you, die." It is true. Because every single thought, revolution, change was brought only when a question was raised. I don't say 'Go. Be a revolutionist.' No, but don't we know change is inevitable? We change every second, every minute. New cells are born whether old ones die. Same has to be with our thoughts too. It has to stay updated. It has to be nourished. How long have you been suppressing your questions on your own inside your mind just because of the fear what others would say/think about you? Being diverted from the questions that you raised in your childhood is not your fault, but due to fear if you let that little child in you die then, my dear, you are at fault. "Ask yourself, What would you do if you weren't afraid, and go do that."